Chloride (Cl–), chlorite (ClO2–) and chlorate (ClO3–) are anions commonly found in swimming pool and drinking water due to treatment with different processes for suppression of bacteria, usually through chlorination.Â Unfortunately, these anions have potential negative health implications and as such, it is crucial to monitor their levels.Â High Performance Ion Exchange Chromatography is used here to determine the residual concentrations of these anions in water samples submitted for evaluations from three separate industrial sites.Â  A newly developed method using SMT ionRes A50 column shows very high resolution and possible detections in the levels of 10 parts per billion of all the anions.

Perhaps the most manageable and cost effective method of water sanitation and disinfection is through addition of soluble solid compounds such as calcium chloride and calcium hypochlorite.Â  However, chlorine dioxide (ClO2) is sometimes the preferred chlorination process of choice because it acts not only as disinfectant, it can also be used to alter both the taste and odor of water [1]. Â Sodium chlorite and sodium chlorate are used in the preparation of ClO2 and as such, application of ClO2 brings about three additional products: Cl–, ClO2–Â and ClO3–Â during its decomposition in water, a process that occurs quite rapidly.Â  As a result, consumption of drinking water treated with ClO2 is the major source of environmental exposure to Cl–, ClO2–Â and ClO3–.Â  Exposure to ClO3–Â has been linked to a decrease in brain mass and alteration of liver mass in rats, and exposure to ClO2–Â has been linked to changes in thyroid function in rats [1,2]. Â In humans, both ClO2–Â and ClO3–Â exposure have resulted in changes in red blood cells due to oxidative stress [13]. Acute Cl– toxicity has actually not been observed in humans except in the special case of impaired sodium chloride metabolism, for instance, in congestive heart failure [9]. Healthy individuals can tolerate the intake of large quantities of chloride provided that there is a concomitant intake of fresh water. Little is known about the effect of prolonged intake of large amounts of chloride in the diet. As in experimental animals, hypertension associated with sodium chloride intake [8], for example, appears to be related to the sodium rather than the chloride ion [4-7]. An acute oral dosing study in dogs demonstrated lethality at levels of sodium chlorate as low as 600 mg of chlorate ion per kg of body weight [10]. Because of its use as a weed killer, a large number of cases of chlorate poisoning have been reported [11]. Symptoms include methaemoglobinaemia, anuria, abdominal pain and renal failure. For an adult human, the oral lethal dose is estimated to be as low as 20 g of sodium chlorate (or 230 mg of chlorate per kg of body weight) [12].

Formation of disinfection byproducts such as chloroamine is another issue of concern with chlorination process.Â  In swimming pools, chloroamines are formed by the reaction of free chlorine with amine groups present in organic substances, such as urine, sweat and shed skin cells. Chloroamines are irritating substances that can cause red eyes in swimmers and strong chemical odor sometimes present in pools. Respiratory problems, such as asthma have been linked to exposure to chloroamine [12,14]. Â Disinfectant byproducts are usually caused by high concentration of disinfectants, such as the ones in this study.Â  It is particularly important to know how much chlorate and chlorite are present in water because of the potential for adverse impacts due to high exposure to these anions. The World Health Organization (WHO) has set the acceptable level of both chlorate and chlorite in drinking water at 0.7 ppm and the Environmental Protection Agency (EPA) requires that drinking water in the United States not exceed 1.0 ppm chlorate or chlorite [1,2].

The IC analysis was carried out on a Dionex DX500 ion chromatography system with a conductivity/UV detector. All analytes were separated on SMT ionRes A50 column. The column temperature was kept constant at 35.0 °C, the flow rate was 0.80 mL/min, and the injection loop volume was 100.0 µL and the Injected sample volume was kept at 15 µL. The mobile phase used was 1.5mM NaHCO3.

A typical standard sample chromatogram of a mixture of the analytes is shown in Figure 1.Â  The three peaks at retention time of about 5 min, 7 min, and 12 min were carefully identified as due to anions Cl–, ClO2–Â and ClO3–, respectively, by running separate pure standard sample of each of the analytes under identical chromatographic conditions.Â A strong signal around a retention time of 7 min. and a weaker signal around a retention time of 5 min. were observed in chromatograms of all chlorite standard; the formation of a second weaker signal around 5 min for the chlorite standard was confirmed to be due to chloride, which is a known impurity of the chlorite standard with a concentration less than 200 ppm. The calibration curves (Figure 2) was constructed by plotting the measured peak areas versus concentrations of the chloride, chlorite and chlorate standards. Exceptional linearity was obtained within the range of concentrations 0.1-30 ppm, resulting in a correlation coefficient of about 0.99993 for all the anions.Â  The resulting correlation coefficient for the retention time of 5 min, 7min and 12 min were 0.99988, 0.99994 and 0.99996, respectively.Â  It is important to note that SMT ionRes A50 column is manufactured using silica-based substrate resin that is chemically bonded using patented [15,16] Total Coverage™, Self-Assembled Monolayer (SAM) of quaternary ammonium type functional ligands that are horizontally polymerized on the surface of the substrate.Â Other commercially available columns in current market with similar functional ligands, designed for similar applications, are generally made using polymer-based substrate, apparently for hydrolytic stability reasons. Examples of such columns include IonPac AS12A from Dionex (now Thermo Scientific); Metrosep A Supp 7 from Metrohm; and Shodex IC SI-90 4E. SMT ionRes A50 column shows uniquely different selectivity for Cl– and ClO2–Â anions allowing Cl–Â peak to elute before ClO2–, unlike the polymer-based equivalence. Further studies are currently being done to unravel the reason for this selectivity difference. The silica substrate used in SMT ionRes A50 is hydrolytically protected by the highly cross-linked polysiloxane underlayer framework created on the substrate by the functional ligands and the bonded packing material or resin does not have compressibility issues associated with polymer-based resins. Â SMT ionRes A50 column is designed to fulfill U.S. EPA Methods 300.0 (A) requirements. 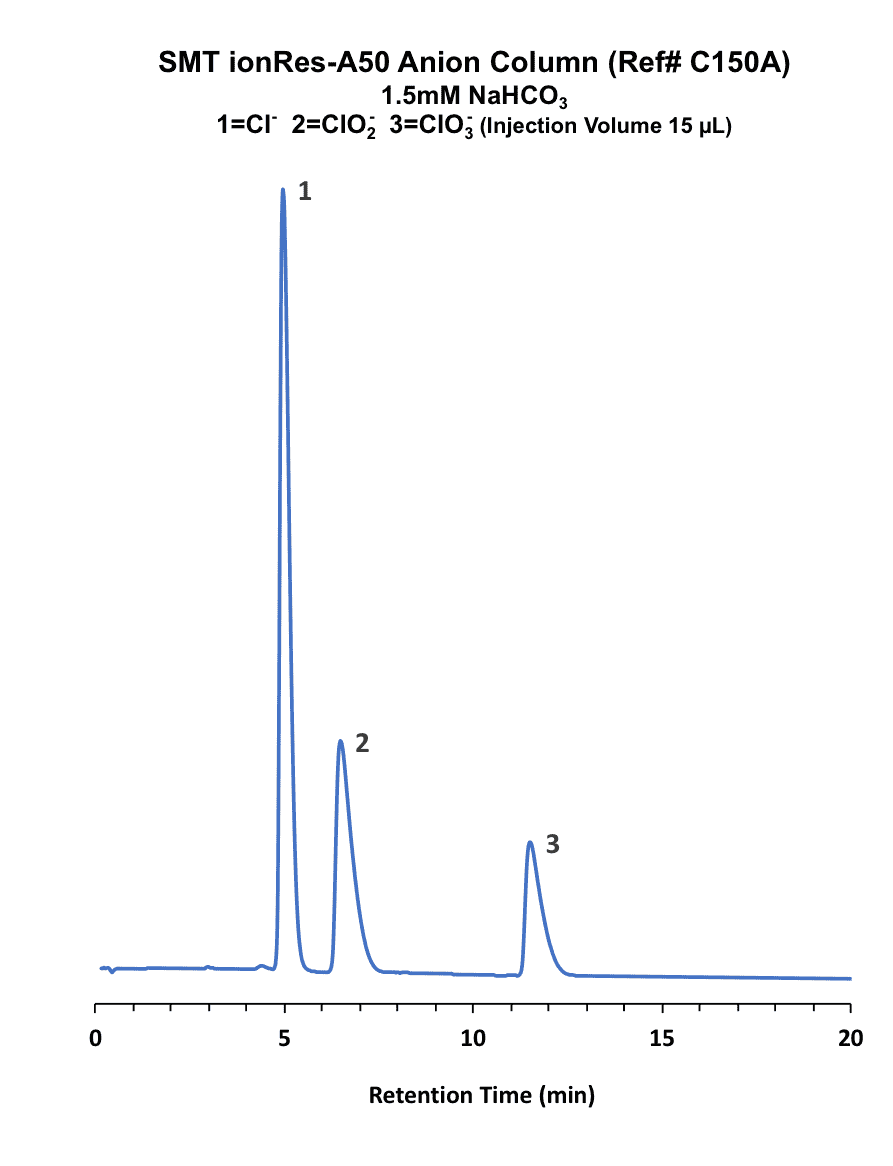 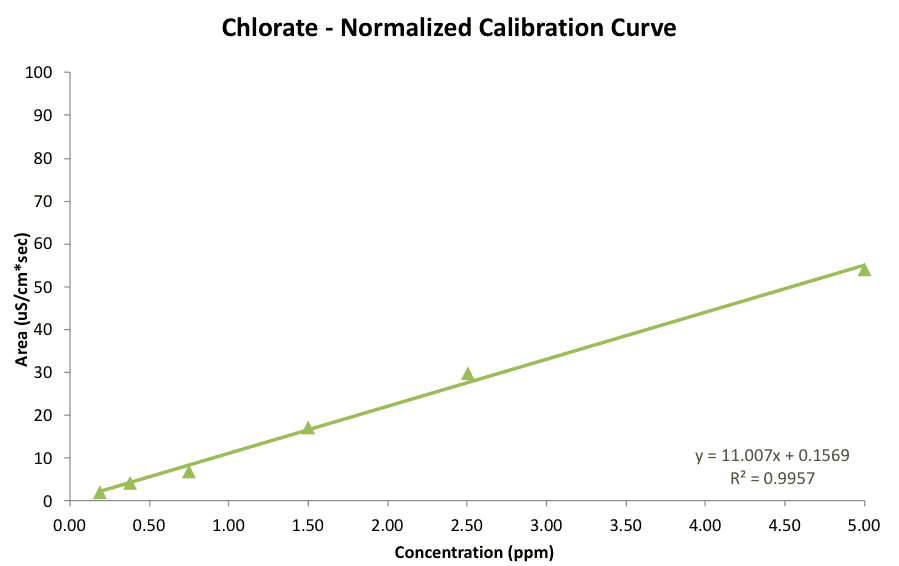 A procedure for determining the concentration of Cl–, ClO2–Â and ClO3–Â in water samples by IC was developed. The procedure is simple and fairly quick involving a development of a calibration standard curves and a direct injection of the water samples and analyzing the samples using IC and the calibration curves of the anions. Predominate ion species found in all water samples submitted for evaluation in this study was Cl–Â and the overall results show that the concentration of all the analytes of interest in the study is within the acceptable level recommended by WHO and EPA [1,2].