High performance liquid chromatography (HPLC) method has been developed for simultaneous determination of Hydrochlorothiazide (HCT), Amlodipine besylate (AML), and Valsartan (VALS) without any pretreatment or pre-purification steps. The method is simple and accurate. Adequate resolution was achieved using SMT, SAM-C18, Catalog number OD-5-100/15 (5µm, 100Å, 4.6mm x 150mm) column, Separation Methods Technologies, Incorporated, Newark, Delaware, USA, and a mobile phase consisting of 0.05M Acetonitrile/Phosphate buffer with pH 3.0 in proportion of (40/60, v/v) at a flow rate of 0.8 mL/min and a detection wavelength of 227 nm. The retention time for HCT, AML and VALS was 2.34, 2.70 and 9.60 min, respectively.Â  The developed method was linear over a range 5-40 Âµg/mL, 5-25 Âµg/mL and 5-200 Âµg/mL for HCT, AML and VALS; respectively. The correlation coefficient of the three drugs was found to be 0.999. The mean percentage recoveries were 100.9%, 99.7% and 98.9% for HCT, AML and VALS, respectively. Overall % RSD was found to be less than 2%. The method was successfully used for validation of Exforge HCTÂ®, a commercially available combined dose tablet formulation containing HCT, AML and VALS.

Hydrochlorothiazide (HCT), or 6-chloro-3,4-dihydro-2H-1,2,4-benzothiadiazine-7-sulfonamide is used as a diuretic.Â  Amlodipine besylate (AML), or 2-[(2-aminoethoxy-(methyl)]-4-(2-chlorophenyl)-1,4-dihydro-6-methyl-3,5-pyridine dicarboxylic acid 3-ethyl-5-methyl ester, benzosulfonate, is a potent dihydropyridine calcium channel blocker used as an antihypertensive agent.Â  Valsartan (VALS), or N-[p-(O-1H-Tetrazol-5-ylphenyl)benzyl]-N-valeryl-L-valine, is an angiotensin II receptor blocker and is clinically used as an antihypertensive agent [1,2].Â  Â These three drugs (Figure 1) are generally used and marketed as combined dose tablet formulation in the ratio of 25:20:320 mg (HCT:AML:VALS).Â  A number of methods have been reported in the literature for the estimation of HCT, AML, and VALS individually or in combination with other drugs.Â  Only a few analytical methods are reported for the simultaneous analysis of these drugs in a combined dosage formulation [3-5].Â  Some of the reported methods include UV spectrophotometric [6-10], Spectrofluorimetric [11], HPLC [12-25], HPTLC [26,27], capillary electrophoresis [28-31] and electrochemical [32-35].

This work focuses on development of simple, sensitive and accurate analytical methods for the simultaneous determination of HCT, AML and VALS in mixtures without the need of prior separation step. The developed method can be used as a yardstick in determining the content of these drugs in commercial tablets.

Chromatographic column, SMT-C18, Cat# OD-5-100/15, (4.6x150mm), was purchased from Separation Methods Technologies, Inc., Newark, Delaware, USA. Â HP 1090 system (USA), equipped with auto injector, thermostatted column compartment, diode array detector was used. Chromatographic analysis was carried out at ambient temperature of 25oC. The compounds were separated with a mobile phase consisting of acetonitrile/phosphate buffer (0.05M), pH 3.0 in the proportion of (40/60, v/v) at a flow rate 0.8 mL/min with injection volume of 5 ÂµL.Â  The effluent was monitored at wavelength of 227 nm.

Preparation of Stock and Standard Solutions

10 tablets labeled to contain 25 mg of HCT, 10 mg of AML and 160 mg of VALS were evaluated.Â  Each tablet was turned into fine powder by grinding and weighed before transferring into 100 mL volumetric flask and diluted with mobile phase. The sample solution was then filtered using 0.45 µm filters (Millipore, Milford, MA).

Calibration curves were constructed in the ranges 5 – 40, 5 – 25, and 5 – 200 Âµg/mL for HCT, AML and VALS, respectively.Â  Triplicate 5 ÂµL injections were made for each working standard solution and the average peak area for each concentration was recorded and plotted against the corresponding concentration to obtain the calibration graphs in Figure 2.Â Â 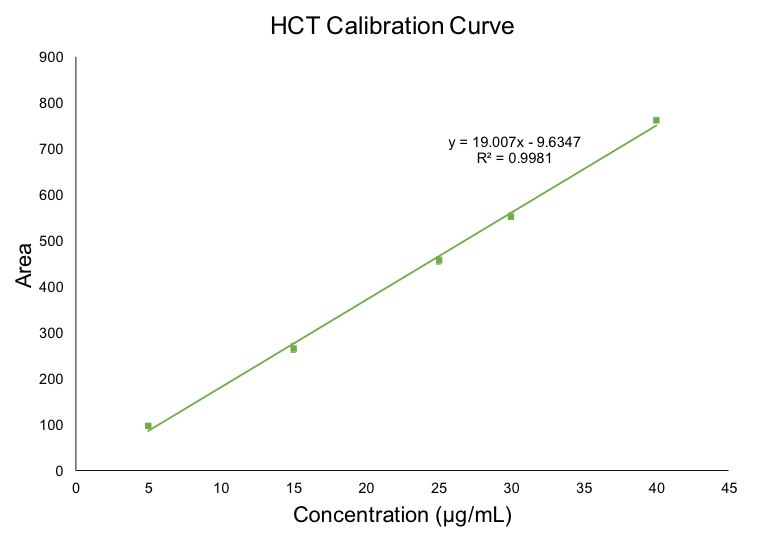 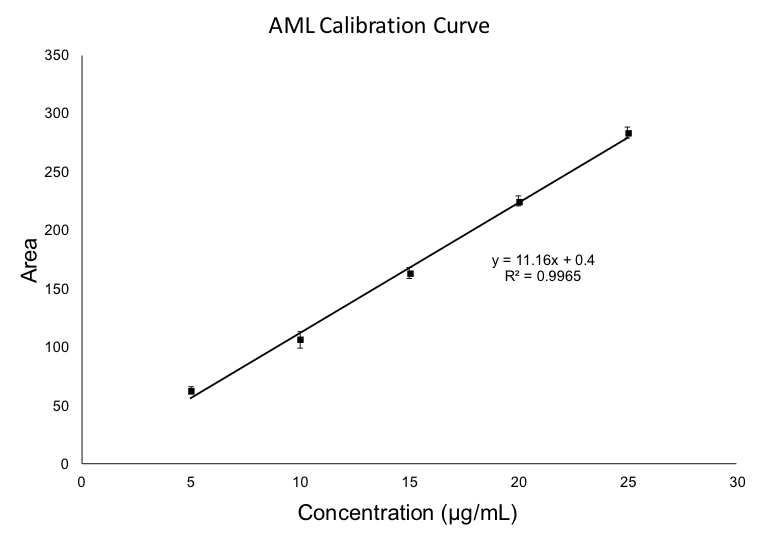 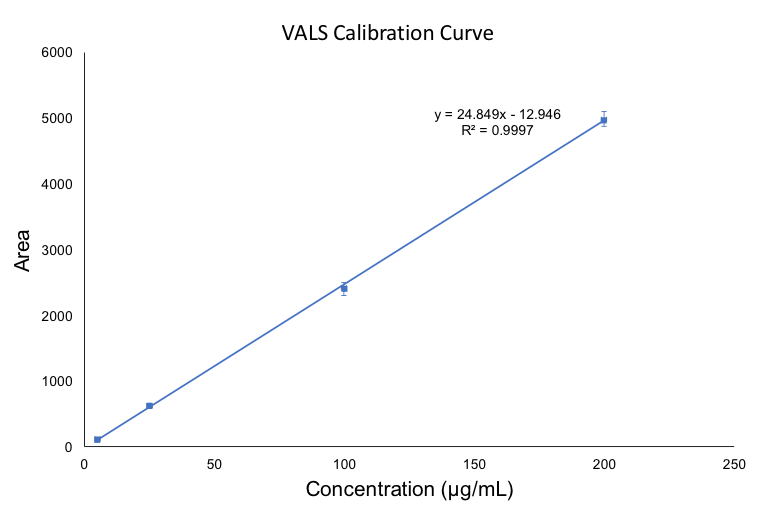 The major objective of this chromatographic method development was to achieve peak tailing factor of less than 2 as well as high resolution of the three components within a short period of time.Â  This objective was well achieved under the described chromatographic conditions. The analyte peaks were well defined, resolved and free from tailing with tailing factor well below 2 for all peaks and the separation was complete within 10 minutes (Figure 3).Â  The elution orders were HCT (tR 2.34 min), AML (tR 2.70 min) and VALS (tR 9.60 min).Â  The wavelength of detector used was 227 nm; previous study by El-Gizawy et.al. had established an optimum wavelength for detection, at which much better detector responses for the three drugs were obtained, to be 227 nm [5]. System suitability tests, including column efficiency, selectivity factor and reproducibility, were performed on freshly prepared standard stock solutions of HCT, AML and VALS as recommended by U.S. Pharmacopeia (USP) [1].Â  The system was found to be quite suitable Table 1. It is interesting to note that SMT SAM-C18, OD-5-100/15 column used in this study offers significantly better resolutions and efficiencies in the analysis of all the three drugs compared to Phenomenex Kinetex column used in similar study by El-Gizawy et.al. [5] 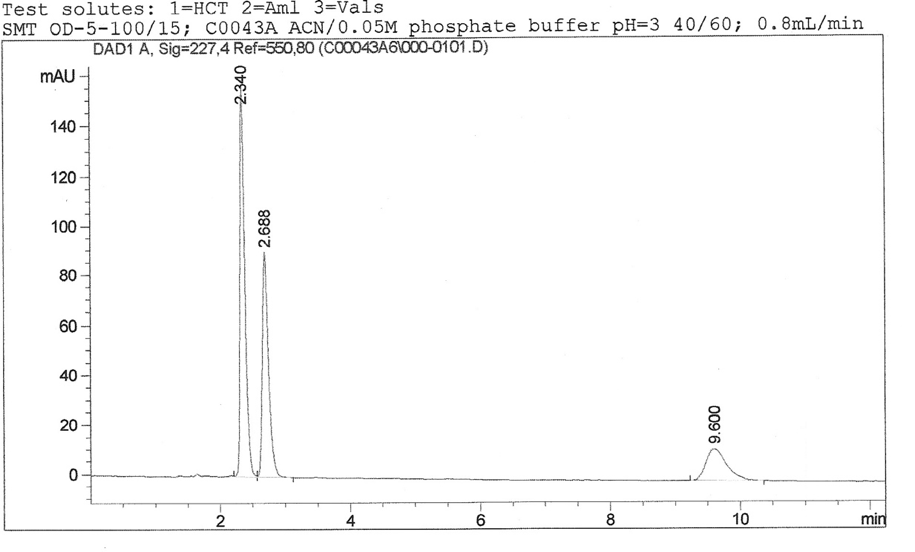 Calibration curve representing the relation between the concentrations of drugs versus the peak area were constructed (Figure 2).Â  Results show linear relationship in the range of 5 – 40, 5 – 25, and 5 – 200 Âµg /mL for HCT, AML and VALS, respectively. Average of triplicate runs were used to calculate the linear regression equation, correlation coefficient, slope and intercept as listed in Table 2.Â  Results of the study indicate high sensitivity of the proposed procedures.

Accuracy of the measurements was determined using the calibration standards of the three drugs with mean percentage of 100.9, 99.7 and 98.9 for HCT, AML and VALS, respectively (Table 3). 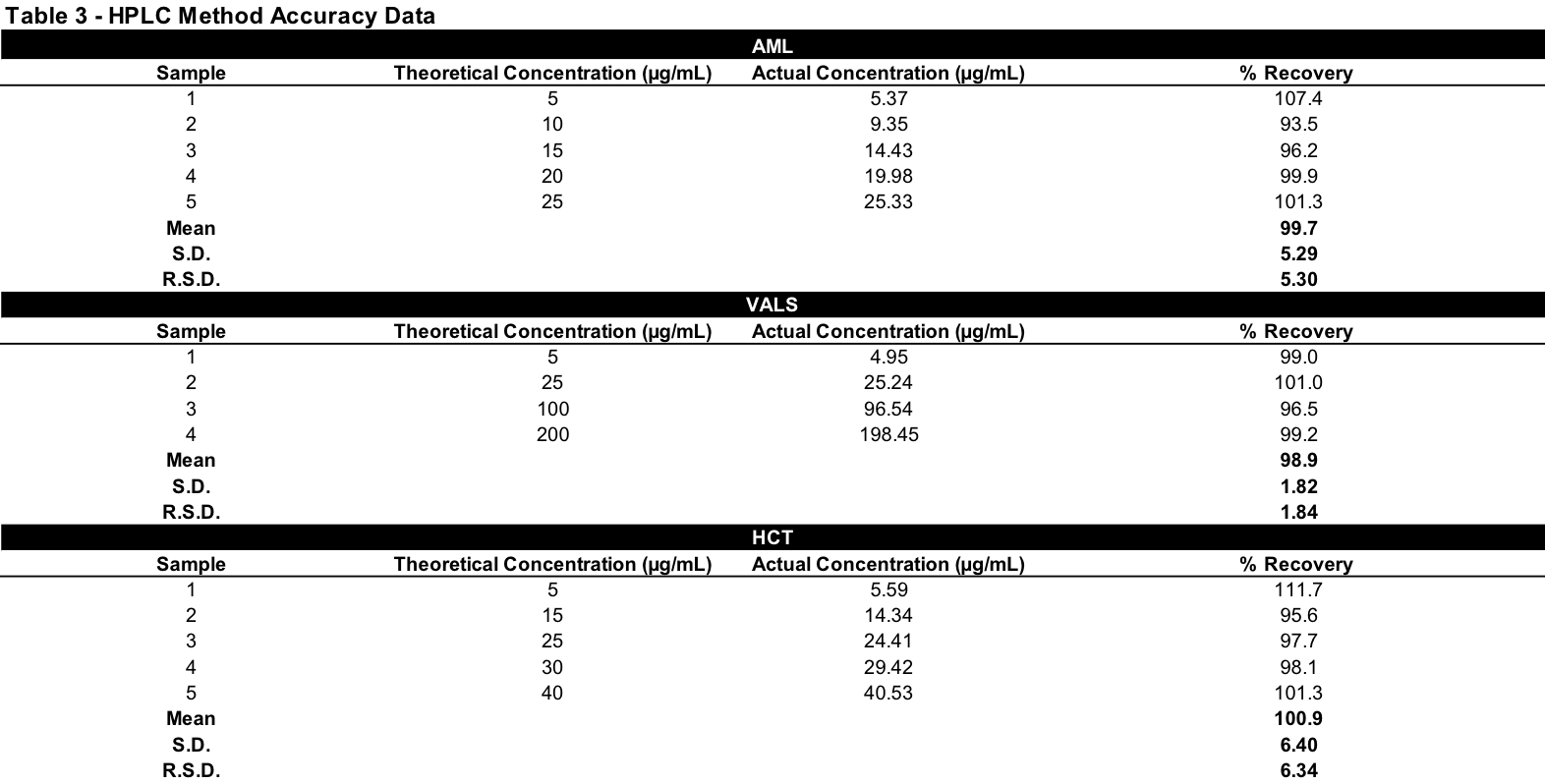 The RSD of drugs peak area in five triplicate injections of standard drug solution was determined each day for 3 consecutive days. The calculated relative standard deviation values were found to be below 2%, indicating good repeatability and reliability of the proposed method as shown in Table 4.

The proposed method was successfully applied for the simultaneous determination of the three drugs in Exforge HCTÂ® 10mg/160mg/25mg (Amylodipin/Valsartan/Hydrochlorothiazide) tablets without interference of the excipients present and without any prior separation steps. The utility of the proposed method was verified by replicate estimations of the pharmaceutical preparation and results obtained are evaluated statistically in Table 5.

The proposed HPLC method was found to be specific and easy to perform allowing rapid and simultaneous determination of HCT, AML and VALS drugs in tablets. Validation of the proposed method is in compliance with USP guidelines.