ABSTRACT
A direct (without derivatization) separation and simultaneous analyses of peroxyacetic acid (PAA) co-existing with acetic acid (AA) and hydrogen peroxide in the equilibrium mixture has been successfully carried out with a reversed-phase high performance liquid chromatographic (HPLC) technique. The method is rapid and utilizes SMT SAM-C8 column (O-5-100/154) and the separation was performed with no additives in the mobile phase in less than 2 mins.

Peroxyacids such as peroxyacetic acid (PAA) and hydrogen peroxide have been increasingly used as disinfectants in hospitals and agriculture, oxidants in organic synthesis and industrial chemical processing as well as in food industry for many reasons. PAA displays a wide spectrum of attack against microbes and offers the advantages of being sporicidal at low temperatures [1], leaving only nontoxic residues [2].Â  In order to ensure the effect of the disinfection the concentration of PAA has to be monitored and controlled continuously. Â Hence, the accurate determination of PAA is required to monitor PAA levels in the disinfectant solutions.

The general synthesis of PAA involves the reaction of acetic acid (AA) with hydrogen peroxide, usually in the presence of a strong acid (typically H2SO4) as catalyst.Â  As a result of its synthetic method, PAA solutions will technically contain significant amounts of hydrogen peroxide as a residue or equilibrium concentration.

Hydrogen peroxide may also serve as a reducing agent toward other strong oxidizers in the presence of strong acids. Therefore, determination of these peroxides requires a reliable distinction between the two substances. However, so far there has been little or no applicable method that achieves a rapid, continuous, selective, and sensitive measurement for the monitoring of PAA disinfectant solution.Â  Various methods have been reported for the determination of PAA.Â  The most widely used methods for analyzing solutions containing PAA and H2O2 are a method by D’Ans and Frey [3] and its modification by Greenspan and McKellar [4].Â  A disadvantage of this method is that it is time consuming.Â  Other methods including electrochemical measurements [5-8], chromatographic methods [9-14], and spectroscopic methods [15-19] have also been reported as alternative techniques.Â  Conductivity measurements [3] can be very rapid and convenient; however, their common disadvantage is their low selectivity.Â  Simultaneous determination for PAA and H2O2 using HPLC [9-12] or electroanalysis methods [7, 8] have successfully been demonstrated but they generally need more than 5 minutes for the determination.

This study describes a simple and successful separation of PAA from AA and H2O2 coexisting in the equilibrium mixture and their simultaneous analysis using reversed-phase HPLC (RP-HPLC) technique that utilizes far-UV detection (FUV) wavelength of 195 nm.Â  The study provides accurate determination of PAA content and can be used to continuously monitor and control the concentration of active ingredients in commercially available PAA disinfectant solutions. Â The method is rapid and requires no derivatization and the separation was performed with no additives in the mobile phase.

All of the chemicals were analytical grade and were donated from First State Testing Laboratories, LLC, Newark, Delaware.Â  The solutions were prepared and/or diluted with deionized water or acetonitrile.Â  Two Spor-Klenz concentrates (Control sample, Lot Number 567609 and Foul sample, Lot Number 575906) were both diluted 1:200 with acetonitrile and evaluated for the composition of their mixtures.

The HPLC unit consists of HP 1090 equipped with diode array UV detector, triple pumps, column oven monitor, and an auto-sampler all controlled with computer using Agilent Chemstation software.Â  The column used was SMT-C8, Catalog number O-5-100/154, 3.9mm x 150mm, Separation Methods Technologies, Inc. (Newark, Delaware).Â  Mobile phase consists of a 50:50 isocratic mixture of acetonitrile and water.Â  All measurements were carried out at a flow rate of the mobile phase of 1.0 mL/min, the column temperature was kept at 30oC and the UV detector was set at 195 nm.Â  The injected sample volume was 5 uL.Â  Each measurements were repeated three times for confirming repeatability.

In the chromatogram shown in Figure 1 measured for the equilibrium reaction mixture (Eq. 1), three well-defined peaks at tR values of about 0.99, 1.28, and 1.52 min were observed. Â By comparing the chromatogram with those of standard solutions of AA and H2O2 measured separately, it was confirmed that the peaks at 0.99, and 1.28 min are due to AA and H2O2, respectively.Â  Thus, the observed peak at tR of 1.52 min would be ascribed to the product (i.e. PAA).Â  In order to justify this fact, a standard solution of AA was spiked in the reaction mixture containing known amounts of PAA and AA and the chromatograms taken before and after the spike were measured.Â  It was noted that the addition of AA in the reaction mixture may negligibly increase the PAA concentration according to the forward reaction shown by eq. 1 within the time scale of the measurement. Likewise, the decrease in PAA concentration in PAA concentration by its hydrolysis (i.e. backward reaction of Eq. 1) after the separation of H2O2 in the column was also be taken as insignificant.Â  Further verification was performed by spiking the reaction mixture containing known amounts of PAA and AA with a standard solution of H2O2 and the chromatograms taken before and after the spike. In each case proportional increase in the spiked compound was clearly observed.Â  This result shows a direct separation of PAA from parent acids AA and H2O2 coexisting in the equilibrium mixture that is often analyzed with HPLC via derivatization method [9-11]. 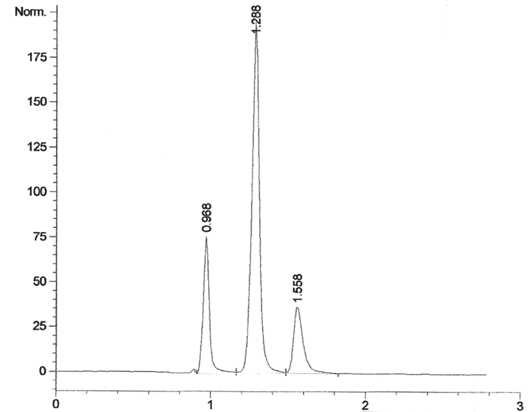 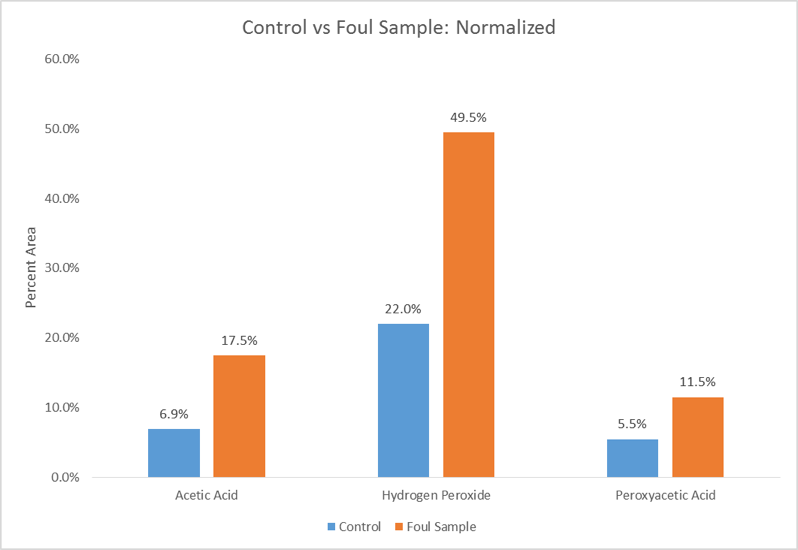 The separation and simultaneous analyses of PAA coexisting with AA and H2O2 in the equilibrium mixture has been successfully carried out with a RP-HPLC technique using SMT-C8 column.Â  The separation was performed with no additives in the mobile phase and in less than 2 minutes. This study significantly offers a fast, direct analysis of peroxyacids (e.g. PAA) that have been generally analyzed with RP-HPLC via the so-called pre- and post-column derivatization methods [12].